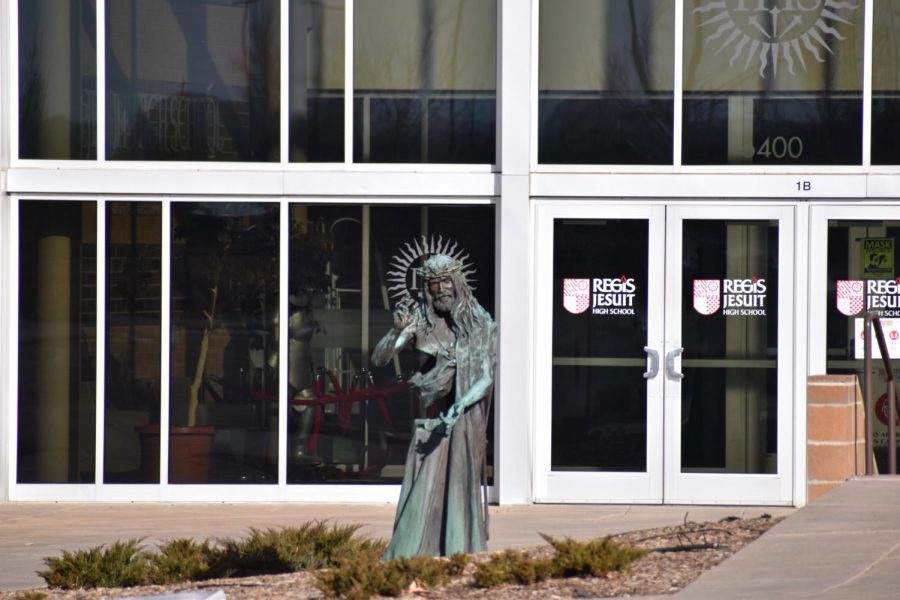 Student journalists can now play it safe, or keep pushing the line.

Sophomore year, Eaglecrest’s media programs merged. And I, a young and hungry student reporter, did not like the new advisor. The newspaper and the broadcast show merged into one massive media conglomerate, which would later be named Nest Network. Since you are reading this article, it is pretty obvious that I am a writer. NN’s new advisor: The video productions teacher.

Mr. Gabrielli, or “Gabs” as the cool kids say, and I are both stern and stubborn. While we butt-heads some of the time, we understand how the other thinks. Over the next three years, we would form a bond, and I can proudly say that I will miss him next year. He has always said that he is purely an advisor, not our teacher. He has shown me how to tell a story properly and keep my emotions out of the media lab.

What happened at Regis at the start of the semester — see Simone Beauchamp’s coverage above — is scary. One day, they are talking about future magazine editions, and then, poof, their advisor is gone. As Co-Editors-in-Chief, Beauchamp and I would be in disbelief if this were to happen at The Nest. Even the thought of this happening down the road is rattling.

Student journalists have to tread a fine line between being the future of freedom of speech and pro-school publicists working at the mercy of their administrators. Regis is a special case, since they are a privately funded school. Eaglecrest and all other public schools do have more laws protecting student journalists, but do they actually work?

“I’m really disappointed, especially being a student journalist. It is always in the back of our mind that something like this could happen. It really shortens the amount of stories you can tell and look into without fear of consequences,” NN Staff member Emmi van Zoest said. “If you want to cover a topic that’s not necessarily allowed or is controversial, your abilities are really limited as a writer. You’re not always able to talk about something you are really passionate about, which is one of the best parts of being a journalist.”

Just a few days prior to the Regis controversy, I was talking to my advisor about covering something that would cause a stir. Gabrielli was nervous because he said that something could happen. He said that he did not want to see my future burdened because of a story. This fear is surprising for many reporters, even those not enrolled at Eaglecrest.

“It’s shocking that in such a modern time we still have to fear about the things we report on and how we can be punished because of what other people think of what’s right and wrong. Knowing that my advisor was only doing their job and supporting us on the content that we want to tell would make me really upset,” Castle View Yearbook EIC Maeve Gorman said. “I would feel like it would be hard to come back from that. It would also make me afraid to tell those stories knowing the consequences that come with it.”

As van Zoest said, being able to tell any story that you want is a major reason for many to join any type of media class. Being able to mess around in a Video 1 class with your friends feeds into the freedoms a broadcast journalist gets in the advanced course down the road. Even a yearbook could want to say something that overarched the school year that some people in their community might have been trying to brush under a rug.

“It is incredibly important to our publication that we have free reign over content. We may be students, but we have our own voices that deserve to be heard. As a student publication, we feel that it is extremely important to have control over the things that we publish,” Castle View EIC Katie McKenna said. Being able to control content and not have to deal with prior review is a luxury that gets to be flaunted at public schools.

“Our staff leadership and adviser ensure that we are knowledgeable about our rights as students, and how the things we publish can have an effect on other people. Due to the fact that I attend public school and my press rights are different from those at a private school, I don’t think we are going to change the way we cover controversial stories,” McKenna said.

Now, you should not go thinking that student journalists just like to cover controversy for fun. While it can be exciting or challenging to tell a story off the beaten path, most reporters only do it for the sake of their community. Sometimes, these stories are itching to be told to peers or faculty members.

“It’s our job to create content that is geared toward our audiences. We make sure to tell the truth and base it on factual information — not our own opinions. We also do our best to share a fair representation of student’s opinions that will keep our student body informed,” Cherokee Trail broadcast executive producer Rylie Barden said. “If that means covering a controversial topic, that’s what we’re going to do.”

This event may not be important to non-journalists. But when something bad happens in the locker room or when a teacher is treating you unfairly or getting treated unfairly, freedom of speech for students impacts everyone. After the world events of the past few school years — Covid-19, #METOO and the height of the Black Lives Matter movement — the importance of journalism is more prominent than ever.

A story from the pro-choice point of view at a Catholic school was always destined to cause more than just a gentle-stir of conversation. But if that is what the school needed to hear or wanted to talk about, then that is what Regis needed. Placing myself in a Regis student’s shoes, I feel second-hand frustration. It is like they were just telling their mom something important to them and their friends, and your mom says that you cannot see your friend anymore just because she disagrees with their beliefs.

“I would be extremely mad. Being in a student media class turns into sort of a family. For a school to just turn around and fire the advisors as a scapegoat to save them from actually changing their internalized issues at their school, I would be extremely mad,” Rock Canyon EIC Ben England said. Losing your advisor is like losing part of your temporal lobe and your heart’s left ventricle. Even in the face of this looming castration, England will still do his duty to his community as a student journalist.

“I think I will continue to check with the editorial board, ask my advisor what she thinks, and let [our] admin know. But at the end of the day, [we will] continue to post these controversial stories because, although there may be backlash, the stories and voices need to be heard,” England said.

At the end of the day, telling these stories are just as important as the photo spread for a state championship football game. Without these stories, all credibility is out of the window. Without the freedom to do or say whatever we want, no one will stick up for the honest truth. And without a trusted advisory, what is the point?

“It’s honestly really sad to see freedom of speech getting squashed down by schools because they don’t follow certain beliefs. If my advisor ever got removed, I would feel really disappointed,” NN staff member Crystal Li said. “I really like Gabrielli, and in that situation I don’t think I could continue being a part of Nest Network. It’s just sad to even think about not being able to express what we think if it doesn’t follow the school’s image.”

We have all heard it: Journalism is dying. The field does not need any assistance in its downward trajectory. Even if private schools have the right to squash a story, they should not abuse that power. Or ever use that power, for that matter. And public schools should be lifting up their programs at any opportunity available.