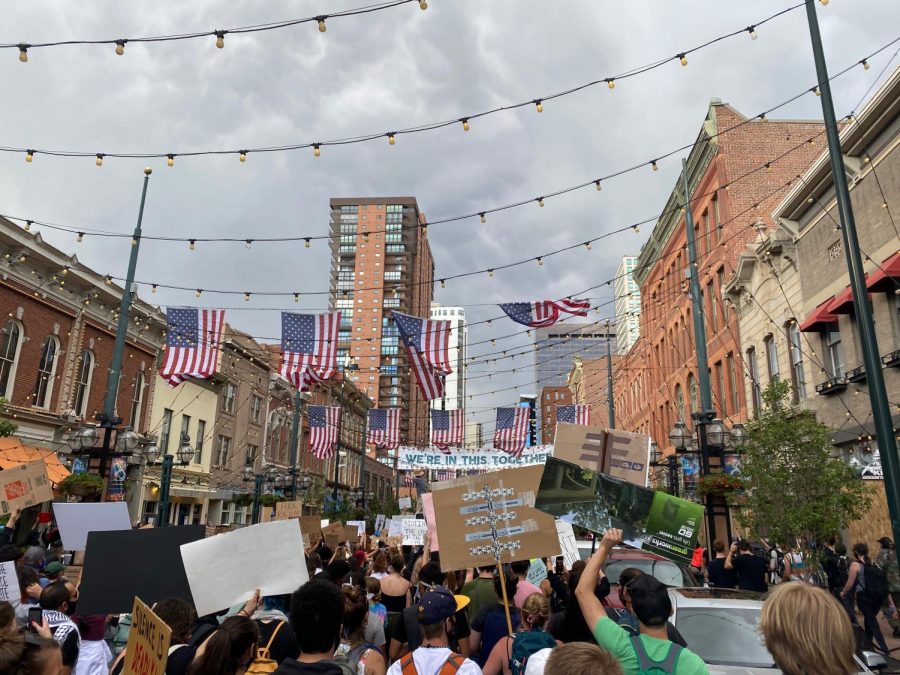 After the video of a police officer murdering George Floyd went viral on social media, the public was outraged. The incident has led to widespread protests for the past three weeks and counting, occurring in all fifty states and countries across the world.

In support of justice for Floyd, many Eaglecrest and CCSD students attended local protests in Denver. The daily protests have attracted thousands of attendants all seeking justice and a change in policing for Colorado and the nation.

Black Lives Matter has taken charge to combat anti-blackness and systemic racism in America and the world since 2013. When the Denver chapter of BLM organized protests, Jada Dixon (‘21) knew she had to take action.

“I originally participated in the protest because I felt like I wasn’t contributing enough from home. I just had a gut feeling that I needed to do something where I felt that I could enforce change,” Dixon said. “I called up my cousins, and the four of us protested downtown for two weeks straight. The last two weeks were exhausting but also very powerful. I felt like I was constantly tired from being in the sun all day, but it didn’t stop me from going out and being heard.”

Rain or sun, protesters have not stopped making their voices heard; to them, this movement is everything.

“In 20 years I want to look back on the revolution that is currently going on and be able to reflect and know that I did what I could to fight for black lives,” Neveah Banks (‘21) said. “Throughout the whole entire march, I had chills. It was so amazing to see a whole community come together and put all differences aside to fight for something so important.”

Dixon, Banks, and other members of the Eaglecrest community were quick to get involved, and there was eventually a student organized protest at the school for the community, following in the footsteps of BLM’s protests.

“[The Denver protests] did inspire our community to throw a student lead protest. The Eaglecrest protest felt really genuine to me, and all the students who showed up seemed opinionated and highly educated on the subject,” Maggie Moreno (‘21) said. “The Eaglecrest protest was more impactful [to me] because it was a bunch of kids in the suburbs and it was self-organized.”

The kids on the block could not sit around and let adults run the movement. People of different race, gender and religion all marched for black lives.

“I participated because it is important for our generation to advocate for and amplify black voices- especially in such a monumental time in history,” said Lauralei Ulep (‘20). “It is important for young people to take social and political issues such as these and claim them in order to progress the nation as a whole.”

Ulep, a recent high school graduate, was excited to see students from Eaglecrest and other high schools all coming together with a common goal in mind. Logan Balthazar (‘21) was also thrilled to see people protesting at Eaglecrest.

“I think this movement is something that’s needed to happen for a while. It has been happening for a while, but the people are now being heard finally,” said Balthazar. “It was really cool seeing all these people you know come support the cause; the turnout was great and the passion they had was amazing.”

Students are ready to see a change in society. Gen Z is moving America in a direction older generations could never imagine. Looking forward to seeing where her country goes in the future, Claire Hendricks (‘20) does not think human rights are even a political issue.

“I think that it’s weird that everyone isn’t on the same side. This issue isn’t conservative or liberal—it’s a matter of basic human rights that anyone should be able to comprehend is a problem,” said Hendricks. “I have learned that a big part of what I believe and who I am is to love everyone and make sure everyone has equal access to opportunities despite their race, gender, or sexuality. It’s something that I truly want to help change in our country.”

Meley Hagos (‘21) protested at Eaglecrest as well, seeing it as her civic duty. She wants her voice to be heard and her face to be seen to help incite change in America.

“Protesting is one of the most important parts of a democracy. It lets the government know that it’s citizens aren’t happy, and it sparks a debate,” said Hagos. “I personally wanted to participate because I wanted to contribute to that. I also kind of felt like I had to, since I’m advocating for my own life. It went really well.”

Since the worldwide protests have started, America has seen a change. Justice for Floyd has begun, starting with the arrests of all four officers involved in his murder. Change has also occurred in Colorado; on June 12, the state passed Senate Bill 217. This bill holds the police force accountable with more restrictions on weapons and requires all cops to wear body cameras by 2023.

“A police accountability and reform bill was actually passed here and it’s clear that every voice, every person, and every march helped lead to that,” said Balthazar.

While Senate Bill 217 is a move in the direction protesters were hoping for, it is not the only change. People have joined together in a way Dixon has never seen before.

“I’ve seen changes in the unity of the people and making our voices heard. By supporting all the peaceful protests during the day, our voices were heard to the point where the mayor was able to join us,” Dixon said. “We were able to get elected officials to stand by our side. It was good to know that we had people in the system whose voices will be heard because of their positions.”

The protests have already caused new laws to be passed in Colorado. With no signs of the protests coming to an end, time will only tell what new changes will come to America. Whatever happens, however, the Eaglecrest community will be proud to say they helped spark this new era.