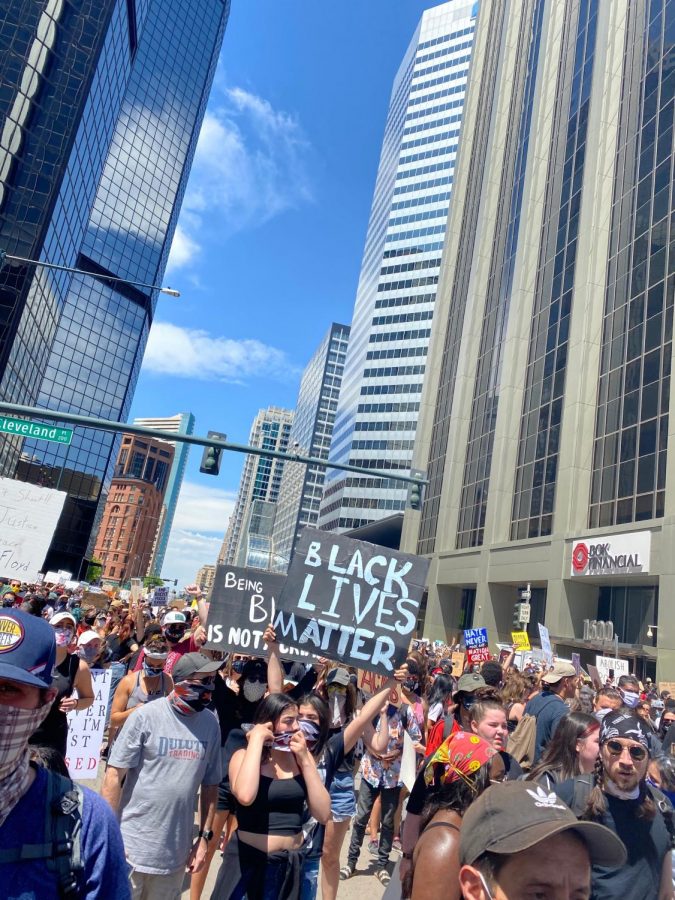 The death of Trayvon Martin, an African-American high school student, sparked an investigation that led to the State of Florida vs. George Zimmerman trial. The trial lasted two days and after sixteen hours of deliberation, the jury rendered him not guilty and acquitted Zimmerman of all charges.

The injustice of Trayvon’s murder revealed the discrimination and systemic racism against black Americans. In response, Alicia Garza, Patrisse Cullors, and Opal Tometi founded the Black-centered political project called Black Lives Matter in 2013. The hashtag, #BlackLivesMatter, spread around social media in the awareness of injustice in America.

The movement seeks to eliminate white supremacy and build local power to intervene in the violence against black communities. BLM quickly gained support from social media and the public. In the wake of George Floyd’s death, the movement quickly started to lead the public in protests and petitions.

On May 25th, a video made waves on the internet of a police officer, Derek Chauvin, kneeling on Floyd’s neck, ultimately leading to his death. George Floyd, 46, was suspected of using a counterfeit bill and arrested in downtown Minneapolis. Floyd was handcuffed and lying face down on the ground when Officer Chauvin kneeled on his neck for nearly nine minutes. During the 8 minutes and 46 seconds, Floyd begs for his life and repeatedly says “I can’t breathe”.

One mistake should not lead to a death sentence- the color of your skin is not a mistake. Black people in America should not fear their lives in the presence of officers. We should not fear our friends or family members becoming the next name to make headlines anytime they are pulled over by police.

If you have social media or watch the news, this should not be the first time you are hearing Floyd’s story. The widely publicized tragedy of George Floyd has been spreading across all platforms of social media. I have seen countless Instagram posts, Tiktoks and Tweets about Floyd and BLM. To be ignorant about this event is a choice, a wrong one.

To counter the Black Lives Matter movement, “All Lives Matter” is a slogan used by people choosing to ignore the truth. Yes, of course all lives do matter. But there is deeply rooted racism in America that places black lives at higher risk. Even though the argument might come from a sincere place, the slogan overlooks the struggle and danger black people face in today’s society.

The meaning behind All Lives Matter is that everyone is equal, but right now that is not the case. Black lives are not protected or treated fairly in society today. We have seen through police brutality that black lives are valued less than other races. Pretending everyone is treated equally is supporting racism.

Systemic racism is real and identifiable; it can be found below the surface in the individual thoughts and workings of our society. Education, wealth, housing, employment, incarceration, government representation, infant mortality rates, drug and immigration arrests are all systems in America that place white people above minorities.

Institutional, legalized racial discrimination such as slavery, and Jim Crow laws have been eliminated in the US; however, their lasting effects are still prevalent in our country. Along with police brutality, redlining and mass incarceration are negatively impacting people of color in the United States.

Redlining stems from the lending discrimination of banks in the 1930s. Although redlining was outlawed in 1968, the lack of action to equalize the property values allows the legacy to live on. Since educational funding comes from property taxes, schools surrounding black neighborhoods have a disadvantage to schools surrounding white neighborhoods.

Poor and minority neighborhoods suffer not only from demographic discrimination, but by the criminal justice system as well. The justice system has failed black Americans. The 13th Amendment abolished slavery over 150 years ago but did not guarentee equality for blacks.

Slaves were freed only to turn around and be forced into prison labor for petty crimes. Black codes restricted the new freedom of African Americans to secure their availability for cheap labor. In many states, if blacks refused to sign a yearly labor contract they risked being arrested and forced into unpaid labor. Today, black Americans still face a higher probability of being arrested and receiving longer sentences.

These racial injustices can be overwhelming to learn about. I am privileged to be learning and not experiencing the current inequalities black people come across in today’s society. Now is the time for us to be actively anti-racist. So how can you do that? Educate and use your voice.

Listen to the black community share their experiences with racism and inequality. Learning more about individual experiences can open your eyes to the variety of ways black people have encountered racism and how to eliminate racial biases in the future.

Gain an understanding about how systemic racism has continued to oppress people of color. Educate yourself with political movements and parties that are campaigning against racism. USE YOUR VOICE! Signing petitions, protesting and voting are all ways to ensure your voice is being heard.