A look at the event that took the nation by storm. 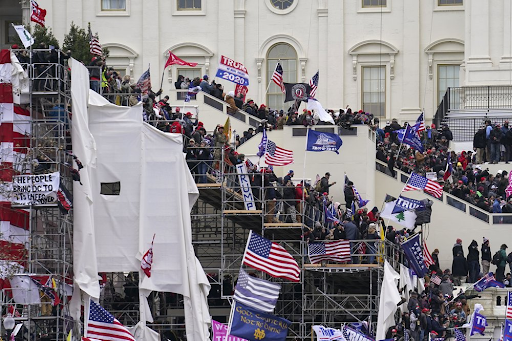 Six days into the new year, we saw a siege that shook the very center of our nation’s power, smashing into the U.S. Capitol building in an event that has since sparked nationwide outrage. The congressional vote to confirm the electoral college count came to a standstill when capitol police reported protesters breaking into the capitol building, some wielding weapons. Congresspeople were told to take cover and many sheltered elsewhere while the volatile crowd smashed windows and ransacked the building.

“The sheer concept of crowds of combative white people assembling together with such force that they were able to physically breach the Capitol is something completely unexpected,” said junior Lucas Fadem of the event. Though the visible division in our country has been undeniable throughout the past year, a culminating event like the capitol siege still came as a shock to so many, particularly when considering it’s catalyst.

At a rally near the White House earlier that morning, President Trump told followers to head to Capitol Hill in protest of the vote that was to confirm Joe Biden as the next president. Thousands gathered that afternoon, restlessly swarming over capitol steps, eventually devolving into a mob which broke through police barriers, scaled walls and smashed in windows to make it into the capitol building, looting art and making their way into the senate chamber and senatorial offices, including that of House Speaker Nancy Pelosi. The event had even greater consequences as well, unfortunately.

U.S. Capitol Police officer Brian D. Sicknick passed away January 7th of injuries sustained while he was responding to the mob storming the capitol the day before, according to the acting attorney general. Additionally, one protestor was shot by Capitol Police, while three others suffered “medical emergencies”, contributing to a total of at least five deaths as a result of the protest-turned-violent. It was an unprecedented insurgency, causing a full lockdown of Capitol Hill until law enforcement was able to quell the chaos.

Senators resumed the electoral college count that evening, with Vice President Pence officially confirming Joe Biden’s presidential win early the next morning. The president seemingly conceded to Biden’s win, saying in a video posted to Twitter, “A new administration will be inaugurated on January 20th. My focus now turns to ensuring a smooth, orderly and seamless transition of power.”

In the same video, Mr. Trump also condemned the violence that occurred, although many -including lawmakers and even social media giants- continue to fault the president for not taking responsibility for the role he had in inciting the protestors. Trump, first silenced by Twitter on Wednesday in response to some of his tweets, was soon after banned by Facebook and Instagram.

Beyond controversy surrounding the president, the capitol siege has had a rather extensive aftermath, resulting in the resignations of the U.S. Capitol Police Chief, the Sergeant at Arms of the Senate and the Sergeant at Arms of the House. Transportation Secretary Elaine Chao, Secretary of Education Betsy DeVos, Mr. Trump’s former acting chief of staff Mick Mulvaney, Mr. Trump’s deputy national security adviser Matthew Pottinger, Chief of Staff of the first lady Stephanie Grisham, and four other members of the Trump administration have consequently resigned as well.

Both Democrat and Republican lawmakers have condemned the actions of the rioters, and some are now calling for the impeachment of President Trump, citing acts of sedition. Is such shared contempt the beginnings of the mending of our polarized nation? Sophomore Sam Schoch isn’t sure.

“Our country has been extremely divided in the past four years, whether it be from a difference in morals, lifestyle, or beliefs,” said Schoch. “Unfortunately, I think this situation has made it much, much worse, and not just for the entire country. I think that liberals and conservatives will be further polarized when they should be coming together.” In the aftermath, alongside communal condemnation of the riot, naturally there have also been intense feelings, a harkening to the polarization Schoch -and so many others- fear. In particular, many have pointed out a double standard displayed during the riots.

“The force that police used to “resolve” [BLM] protests -93% being peaceful- was unbelievable,” said Fadem. “Quite contrastingly, the group of people who stormed the Capitol yesterday weren’t fighting for equality, they were fighting out of not getting their way; and police were allowing this to happen.” Fadem also pointed to the irony of many of the ‘Blue Lives Matter’ flags he saw rioters carrying as they directly opposed police in an attempt to enter the capitol building.

The event has also divided the Republican party itself, incensing those on both sides of the aisle. “We gather today due to a selfish man’s injured pride and the outrage of his supporters whom he has deliberately misinformed for the past two months and stirred to action this very morning,” said Senator Mitt Romney in a statement when the Senate reconvened. “What happened here today was an insurrection, incited by the President of the United States.”

This riot -or siege or protest or act of violence, whatever it may be called- was by many standards cataclysmic and catalytic. Yet it also presents our nation and our very own community with a unique opportunity: will this bring us together or merely pull us further apart?