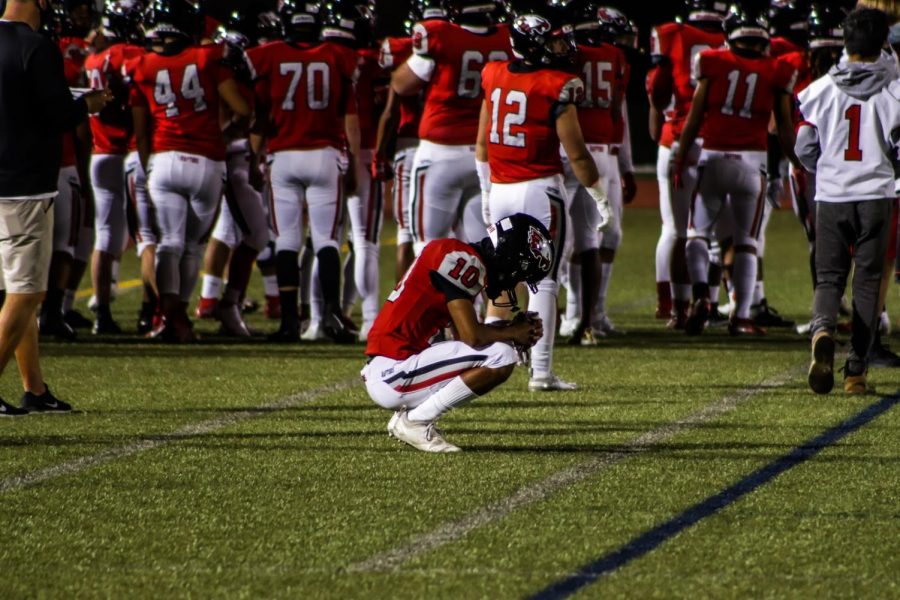 Week one, #10 Langston Williams (middle) crouches down on the sidelines while the team groups up to converse pregame.

With CHSAA announcing the returning of football in late September, teams were forced to cram practices to get ready for a short season at the beginning of October. Teams will end the season on November 14th, playing 6 games to determine their rank in their specific conference.

Eaglecrest took these circumstances and set the tone for an exciting yet short season ahead. Going 2-0 heading into week 3, Eaglecrest is currently ranked No. 5 in Class 5a.

In week one, the Raptors beat Cherokee Trail 62-50 in an intense, high scoring game. #4 Seyi Oladipo, after committing to Boise State earlier that Friday, proved his worth by returning two 95+ yard kickoffs. #2 JP Luketo also had an outstanding game with 165 rushing yards and 3 rushing touchdowns. #3 Khalil Howard, our new starting quarterback, also had an amazing first game playing for the Raptors. He had a 72% completion rate throwing for 219 yards in total, with two touchdown passes. Cherokee Trail put up a good fight, but Eaglecrest was able to pull through and take our first win of the 2020-2021 season.

Week two came down to the wire, with Eaglecrest coming out on top 43-41 over our rival, Grandview. The Raptors kicked off the game, receiving the ball and succeeding in a long drive that resulted in a 1 yd touchdown from #2 Aiden Medina. Eaglecrest was able to maintain the lead up until the end of the first half, when Grandview returned Seyi Oladipo’s punt return fumble to make the score 28-21. The game ended up going back and forth like this until Eaglecrest’s Aiden Medina was able to clutch the win with a 2 pt conversion to increase the Raptors lead by 1 point in the last minute. Although there was a lack of fans in the stadium last Thursday due to COVID-19, the energy was able to persist throughout this intense rivalry match up.

The Raptor community and other high school sports fans expect a lot from Eaglecrest football as they set the tone for a successful season.