Once Every Four Years

The Significance of Leap Years 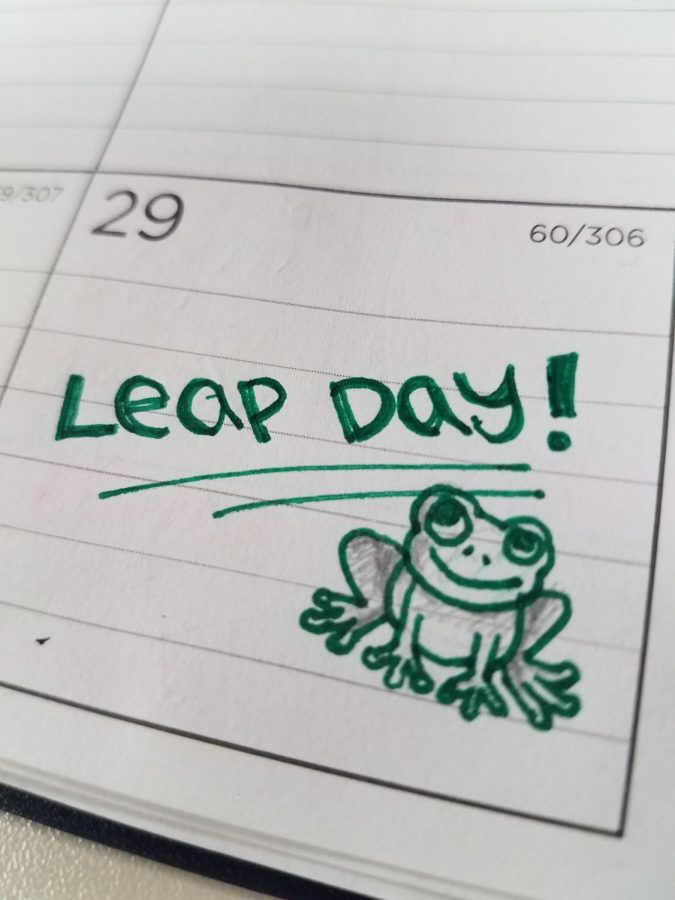 Every fourth year, something very special happens. Not only do we have a presidential election and the Olympics, but we experience a 366-day year – a leap year. The Earth takes about 365.24219 days to orbit the sun. 5 hours, 48 minutes, and 46 seconds over the 365 days of our normal calendar year. Because the Earth’s orbit isn’t an even number of days, every four years we have to play catch-up, adding one extra day to February.

Leap is also extra-special to a select few, sometimes called “leaplings”, who were born on the 366th day. This year, leaplings born in 2004 will be celebrating their 4th birthday.

“My favorite part [of having a leap year birthday] would be telling everyone I’m turning four,” said sophomore Lameese Makkawi. “And the excitement I get when people find out I’m a leap year baby.”

“Having a leap day birthday is exciting because it’s very special and the anticipation every four years calls for a big celebration,” said Makkawi. “It kind of marks milestones in my life.” And although non-leap year birthdays may be less special, leaplings are still a year older and most will still celebrate.

“I celebrate my birthday March 1st if it’s not a leap year,” said Makkawi, adding that “ it’s usually a bit smaller of a celebration.” Like Makkawi, those born on leap day must choose a different day for a birthday celebration, typically either March 1st or February 28th. Of course, leap year is inexorably tied to our calendar, the Gregorian calendar.

Leap year was a thing even before the Gregorian calendar was around, though. It’s first use was, in fact, in the Roman empire, and it was created by none other than Julius Caesar. The Roman calendar, by the time Caesar came to power, was wildly out of line. To remedy the Roman calendar so it conformed to the seasons, Caesar decided to instate an extra day, called intercalary day or leap day, every four years, among other changes. This additional day was originally placed on February 25th, making February 30 days long every four years (February was normally 29 days in the Roman calendar).

However, adding an extra day every four years doesn’t keep the calendar perfectly in line since the Earth’s orbit is 11 minutes short of 365¼ days. This means that eventually, the Roman calendar was over 10 days off track, prompting Pope Gregory XIII in 1582 to reform the calendar so that it better resembles the one we use today, the aptly-named Gregorian calendar.

Because of the 11 minute discrepancy, scientists sometimes add a Leap Second, like in 2015 when June 30th was 24 hours and one second long. Since 1972, 25 leap seconds have been added to the calendar, though not on a regular basis since Earth’s orbit itself is irregular.

And even though it’s only one second, Leap Seconds cause their own problems, like in 2012 when the addition of a second caused many prominent sites to crash when computers had trouble processing a 61 second minute. Thus, some scientists argue for the addition of leap hours every few centuries, which would be easier planned and easier to deal with than leap seconds.

Aside from their confusing mathematical history, leap years have brought about interesting superstitions and traditions. After 1582, a British play joked about February 29th being a day for women to act like men, which gave way to the tradition of women proposing to men on leap day. Today, that tradition has developed into what’s known as Sadie Hawkins Day or Bachelor’s Day.

For some, leap year is considered very unlucky, but depending on who you are, it can be a day of luck. The Greek, for example, believe marrying in a leap year is bad luck, while the Irish believe it’s good luck and continue the tradition of women proposing to men on February 29.

Throughout the centuries, there have inevitably been some interesting coincidences and events on leap day. In 1692, the Salem Witch Trials officially began when the first warrants for arrest were sent out on leap day. On February 29, 1968, the Henriksen family in Norway had their third child -all three of which had been born on consecutive leap years.

Regardless of how one celebrates -or doesn’t celebrate- leap year, it’s a phenomena that affects us all; without a leap day, our calendar would be out of whack and greatly misaligned with the seasons.